THE GIRL WHO STRUGGLED TO PAY OFF STUDENT LOAN DEBT

It was honorable, heroic, and horrible. I made the $116 monthly payments because I’d signed the papers and didn’t want to ruin my credit rating. Unlike two of my older siblings, who graduated from Queens College when it was free, I would have the privilege of attending a private institution of higher learning. My father, a public school teacher approaching retirement, drove me to the Dime Savings Bank of Williamsburg (located at the intersection of Union Turnpike and Utopia Parkway) to secure the necessary financing. My fifteen year old self examined the amount, hesitated, and glanced at my father. Was I signing my life away?

My Father: “Don’t worry about it.”

Did that mean my parents would take care of it?

Those loans became my responsibility, especially as I “broke the deal” with my parents and refused to apply to law school. Autumn of my senior year was spent throwing the telephone against the wall of my dorm room every time badgering family members called.

My Mother: “So you’ll graduate and go to work.”

My reply: “That’s fine with me. I’m not afraid of work. I’m part of the proletariat.”

After I was accepted early admissions, my over-controlling parents had reluctantly dispatched me from Jamaica Estates, Queens, to the Upper West Side of Manhattan. I arrived at Barnard College without a typewriter and barely enough money to do laundry. During my sophomore year, I  worked as a file clerk at the Columbia Journalism Library. The need to have my own money and be free of my family meant that I eventually stocked food at the student-run Furnald Grocery, cold-called alumni on behalf of the university, worked over the summer as a day camp counselor, and secured a paid internship with a political media consulting firm.

Following two short-term post graduation jobs, I landed a permanent position in entertainment public relations that paid $12,000 a year. I made the case that, given the Reagan presidency, politics and entertainment were related fields, and the small firm happily took me on. The boss was pleased with my writing and I found myself preparing press kits and releases, “items” for gossip columnists, and client biographies. Basking in his trust and appreciation, I suspended my ethical reservations and briefly imagined a future in the field. The only problem: I was poor. Every week, after taxes, I netted $166.78, out of which food, phone, transportation, housing, and student loan debt needed to be covered. As the product of Depression Era parents, frugality was in my D.N.A. Without buying clothes or eating in restaurants, I miraculously managed to save $100 per month. Fighting for survival meant there had to be something to show for all of my efforts and the hope for better days.  If there had been a loan forgiveness program, my twenties would have been completely different. Perhaps I could have avoided returning home and living with my difficult parents. Surely I would have had more choices about how to launch and build a happy and independent life…

David Leonhardt’s recent  essay in The New York Times (Monday, 11/19, “A Giant Welfare Program for the Upper Middle Class”) opposing cancellation of student loan debt, brought my blood to a boil. Leonhardt deems himself undeserving of loan forgiveness  because it built his character. He went to Yale with the help of extended family members and graduated with about $22,000 in debt (in today’s dollars). That’s a pittance compared with the $30,000 in debt I started paying off six months after college graduation. Not only does he find decent paying work in his chosen field, Leonhardt never addresses the enduring wage gap between male and female college graduates. He claims (does not cite sources) that the average four year college graduate who takes out loans ends up with less than $30,000 in debt, and that such debt translates into monthly payments of $300 – about 7 percent of the starting salary of a brand new college graduate (more than $50,000 a year). If a young person resides in an urban metropolis, has a monthly student debt payment of $300, how do they pay rent, eat, travel to work, and live during their twenties, especially if in a state of war with a nuclear family of modest means? As for that fabulous recent graduate salary of $50,000 – I never made such money in my life, even with an M.A. in Politics and a career in government service. I suspect that most female graduates from liberal arts colleges during the 1980s, ones who didn’t enter the professions of law, medicine, finance, or suburban teaching,  also faced similar struggles. My peers with rich parents – well, that was a a different story. Their parents bought them apartments and cushioned whatever financial challenge “the real world”sent their way.

Shortly before our marriage, my much older husband to be offered to pay off the remaining student loans. I didn’t ask him to. He volunteered, noted that given the high interest rate, it made sense for him to eliminate this expense. How amazing it was to inform the bank and receive confirmation of my release from financial servitude! How incredible it was to find love and financial security in capitalism! Luck in romance – not enlightened public policy – saved the day.

Most young people will not have my good fortune. Most will not have enough money in reserve to treat an unexpected illness or accident, fund a controversial medical procedure, or to cover a month of rent and security deposit if a roommate arrangement dissolves. Due to the high cost of living (including student loan debt) hard-working college graduates can wind up returning to toxic families and spend their twenties lonely, bitter, broken, and broke.  Just because I suffered (and had my character tested) does not mean that other people should endure such misery. Ruling class offspring on good terms with their parents never have to worry about paying their bills. There’s always a parental social network to harness, a guaranteed income stream, an array of choices about work, food, travel, living space, or clothing, and, most importantly, the use of time. What’s good for the happy, wealthy families would be good for the rest of us. Student debt forgiveness would help the next generation step forward into adulthood with much less fear and desperation. It’s a public initiative which mitigates the extreme inequality and, thus, can change so many lives for the better.

As the winter holidays approach, I’m counting down to the 20th yartzheit of my mother. For the last six years of her life she was, improbably, my best friend. We had been in a state of war since I was thirteen and our reinvented ties had led to the healing of deep wounds. While I have not forgotten the pain that was a part of our relationship, the fact that she took responsibility for her hurtful actions and apologized, made a tremendous difference. Having forgiven her, I was able to appreciate and recognize her creative struggles later in life. After retiring as a  school psychologist, she became a poet. Most evenings, around 9:30PM, she would call my Brooklyn Heights home and ask for a critique of her poetry.  I was as tough on her as I am on myself. As the days shorten and grow darker, I wish she was here. If only I could share my poetry with her, share my literary adventures,  and hear what she would have to say! The yearning to enjoy her company – it never ends.

It is my hope the upcoming holidays will be a source of pleasure and strength. Keep your eyes on the prize: Impeachment, Resignation, and Elba! Lots of love flowing your way… 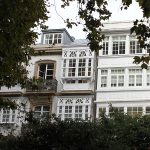