There’s that awful moment when you discover the brilliant scholar, whose review of “Local Deities” in “The Nation” (“Staying on Alone”, 2/12/90) changed your life, has died. You read his 2005 obituary in cyberspace, note that he passed of cancer at the age of fifty-six, and cry, because in a few keystrokes you’ve found and lost an entire world.

How can a book review change one’s life? Without reading this article by the late Professor Fred Pfeil, I never would have discovered “Local Deities”, the incredible novel by Agnes Bushell. Her book builds upon the activist journey explored in Marge Piercy’s “Vida”, juxtaposing the experiences of American radicals remaining in their conventional lives with those who chose to make revolution and headed underground. The superbly written “Local Deities” seamlessly integrates the political and personal, capturing the moral dilemmas of American left-wing radicals during the 1980s as they navigate the challenges of living ethically in advanced capitalist society. This novel, published during the Republican interregnum, examines the limits of working within the system and the consequences of principled dissent.

“Local Deities” portrays the deep friendship Erika and Annie forged during the upheavals of the late 1960s and early 1970s. The novel conveys their mutual loyalty, idealism, despair, and implications of their decisions to embark upon divergent political paths. Annie and her husband Paul go underground, conducting carefully planned attacks against corporate targets, aiming to raise class consciousness without taking innocent lives. They are raising three children while in hiding. Erika and her husband Simon, a left-wing attorney, find their relationship disintegrating as alienated labor and the demoralizing impact of Reagan’s America weigh heavily upon them. As Simon turns inward, Erika, now the mother of two young children, begins drifting away from the marriage. After Paul and his children are apprehended by the F.B.I., Simon agrees to defend him in the first of several trials, the verdicts of which are likely to keep him behind bars indefinitely. Erika decides to change the direction of her life and focus on the fate of Annie’s children. Will Annie resurface and raise them? Will they be given to Paul’s aging mother, Annie’s sister living in the Bible Belt, or an urban collective of ideologically pure activists? What place can these children truly call home?

“Local Deities” fearlessly explores what living as a revolutionary entails. What makes the novel so wonderful is that love, not didactic political prescriptions, serves as the fulcrum upon which interwoven stories of women’s lives spin. Indeed, one could argue that “Local Deities”, like Toni Morrison’s “Beloved”, is a Great American Feminist Novel.  It’s a lost gem, meriting recognition and discovery by a new generation of readers.

For the past fifteen years, I have been thinking about the politics and the historical trajectory of women’s stories, dating back to “The Trojan Women”,  “Medea”, and “Scheherazade.” Like the aforementioned epics, “Local Deities” has been an enormous influence upon “The Wife in Winter: Seduction of The Muse.” If anyone reading this blog is acquainted with  Agnes Bushell, please let her know that her novel is remembered with awe, affection, and eternal gratitude. 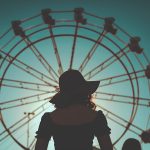 REINVENTING THE WHEEL OF FEMINIST DISCOURSE, “GIRL POWER”, AND THE LEGACY OF CHATTELFeminist Contemplation